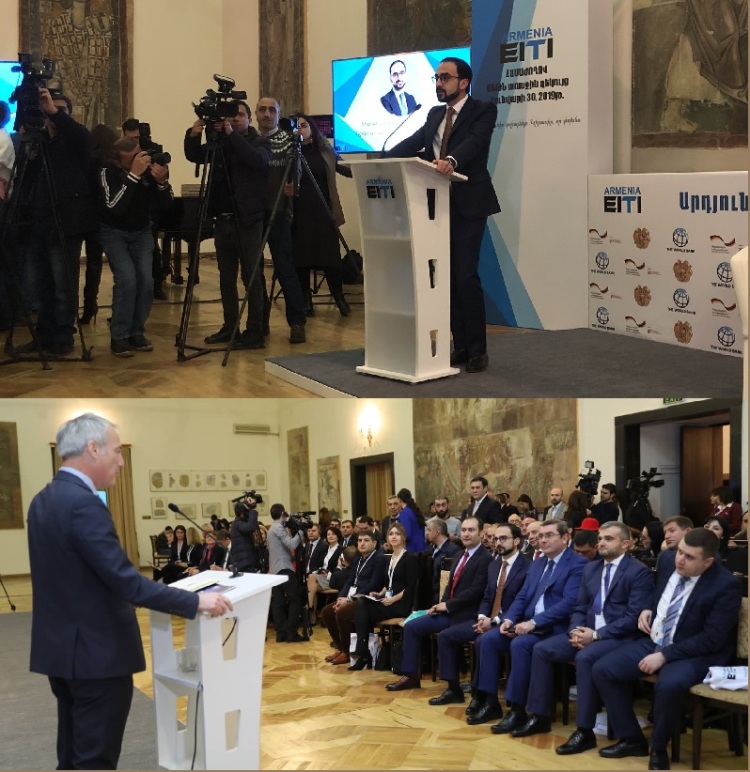 On January 30, the Government of Armenia in collaboration and with the support from the World Bank and Deutsche Gesellschaft für Internationale Zusammenarbeit (GIZ) organized a Conference devoted to the First National Report of the Extractive Industries Transparency Initiative (EITI) of Armenia in the presence of Chairman of SRC, Davit Ananyan, UK Ambassador to the Republic of Armenia, Judith Farnworth, Deputy Head of EITI, Eddie Rich with many experts, NGOs and stakeholders.

RA Deputy Prime Minister Tigran Avinyan delivered an opening speech at the conference and noted: “Armenia’s political transformation is ongoing and the priority of our Government is the economic development and reforms aimed at improving the wellbeing of our people.
Public attention has been always riveted on the metal mining industry in Armenia , taking into consideration its role in country’s economy, as well as social, environmental, technological and other issues related to the sector’s activities. Thus, it is clear, therefore, that enhancing transparency and accountability of the sector and making it compliant with international criterias is our primary goal. And the most reliable way to reach this goal is the full implementation of the EITI in Armenia”.

“I would like to emphasize the importance of the successfully established Multi-stakeholder group. Its different members, from government, civil society and industry played a critical role in EITI’s Standard implementation in Armenia, and will continue to play a critical role in mining sector policy discussions”: emphasized Sylvie Bossoutrot, Country Manager of the World Bank for Armenia.

Deputy Head of the EITI Eddie Rich said: “Mining is the fastest growing sector in Armenia. Making sure that policy in the sector is well informed and carried out is going to be critical. It will ensure Armenia gets what it should and builds an attractive investment environment. We congratulate Armenia on the publication of its first EITI report outlining in detail for the first time in one place how the whole mining sector is governed. This information is increasingly available online. It is the basis for good policy”.

Armenia published the first national report on EITI the global standard promoting the open and reporting management of natural resources.
It is one of the most important results of standard enforcement activities preceded by skill development activities, sectoral studies, legislative amendments, etc. The EITI national report aims at placing comprehensive sector-related information in one place by enabling the stakeholders to apply them to carry out analyses, develop substantiated discussions around problems, as well as to undertake reforms in the sector.

Chairman of SRC Davit Ananyan tweeted:
“The Government of Repulic Armenia has taken this step to show the public its intention readiness to be transparent both in the mining sector and generally in the process of governance”.

UK Ambassador to the Republic of Armenia, Judith Farnworth tweeted:
“Another important milestone for Armenia on its EITI journey. Thanks to hard work and collaboration between Armenian Government, Armenian business and civil society.
UK proud to be amongst international supporters of this process.”

Note that during the Conference 3 panel discussions were also held with the focus on topics regarding the transformative role of the EITI and the future of the systematic data publication disclosure of the beneficial owners, as well as the responsible mining.

During the conference, The official website http://www.eiti.am was also launched, where all the key documents on the EITI implementation are published. From website users can go to the EITI online reporting system. In 2018 for the first time state bodies and mining companies submitted their EITI reports through this platform, which are available in PDF format at http://www.eiti.am .

Officials in Armenia continued their interaction with the report and during the meeting with the WorldBank delegationon Friday 1st February, Davit Ananyan discussed Country Partnership Framework for Armenian Government’s programme as well as first EITI report and Mining sector strategy.

CSOs played major roles in the development of the Extractive Industries Transparency Initiative (EITI).
The EITI, launched in 2002, has been described as a coalition of governments, companies, civil-society groups, investors and international organisations, and is conceived of as a standard for monitoring compliance with contract disclosure and revenue-transparency criteria to ensure that companies publish what they pay and governments disclose what they receive from the extraction and export of natural resources.
Therefore, a key element of the EITI’s success lies in its ability to build dialogue and foster collaboration between different stakeholders in the design, monitoring, and evaluation of the EITI.
The multi-stakeholder approach of the EITI has created a valuable forum for civil society in many implementing countries to discuss revenue transparency. Civil society groups increasingly contribute their expertise and experience to foster this dialogue.
The EITI’s integrity rests on ensuring that civil society has the capacity and ability to play an active role in the EITI in each country as well as in Armenia, and contribute to successful implementation. This participatory process is one of the significant benefits of the EITI, making it a broad based movement and not just a reporting standard; and from this point the Civil Society in Armenia are invited to be more involved about EITI implementation especially after the release of the first report.